“Put on your Sunday clothes when you feel down and out
Strut down the street and have your picture took
Dressed like a dream your spirits seem to turn about
That Sunday shine is a certain sign
That you feel as fine as you look!” 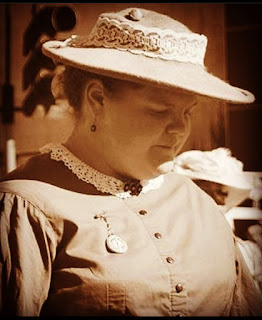 How we dress gives others a peek into who we are or even who we want to be. Whether it is a pair of denim jeans with a t-shirt or historically inspired fashion- our clothes speak volumes. When we choose our clothing, it gives us an opportunity to say something and make a choice about what parts of ourselves we share. I have recently been going through a seemingly slow transition in the way I dress. I am now taking the next steps to owning the wardrobe I have in mind.

At first, I contemplated going all out when it comes to wearing fashions inspired by history. As I searched and planned, it became clearer that for daily wear, I was unsure about dedicating my entire wardrobe to a specific period in history. I briefly considered giving up on the prospect. Then a costumer by the name of Morgan Donner came to the rescue. She posted a video on her YouTube channel explaining the concept of history bounding- a method of blending the fashions of history with the present day with as much or as little historical inspiration as one desires. This concept stemmed from the idea that became popular at Disney resorts called Disney Bounding. (Adults are not allowed to dress in the full costumes of the characters in the park, so a movement was born that takes color schemes and translates them into “normal” outfits.) I began to wonder if this might be a more reasonable route to including the fashions and even silhouettes of the past allowing them to exist in the present day.

Over the past several years, I have ceased wearing trousers and the like. The only exception was breaking out my borrowed woolen military trousers, which were a part of a previous project no longer in progress, to wear this winter in about a foot and a half of snow. At this point in time, my typical daily dress has consisted of blouse and skirt combinations with Victorian underpinnings concealed underneath. This style has served me well- and has even become a signature for me.  Most of what I have been planning includes this.

With a clearer vision, I started dreaming up ideas for this new concept.  I knew I wanted to have a mix of historically based pieces which could be mixed and matched to create daily outfits. Some of the styles will be made a bit more modern simply by the fabric choices.  I knew I would need patterns for some of the pieces. I had previously purchased mid-Victorian patterns including several bodice styles, skirts/petticoats, a winter jacket (known as a paletot), and the underpinnings. I am also trying my hand at doing some pattern drafting- eek! In addition to the patterns, I have spent a fair number of hours perusing the internet for ideas- extant dresses, publications from various 19th and early 20th century decades and looking through the library of research books I inherited from my mother. I was privileged to be able to purchase a 12-month, bound copy of Godey’s Lady’s Magazine from the year 1861. I will continue to do research and apply it to the conceptual side of my wardrobe.

In addition to making wearable clothing pieces inspired by history, I will also be including a few snippets of my making period outfits for living history purposes. These outfits will include aspects that are as period correct as possible for the eras I need and pieces that can also translate into my daily wardrobe. I will not be calling them costumes since they are simply the clothes I wear.

As I embark on this little adventure, I will be documenting it in an ongoing blog series which I have labeled as {Threads}. The posts in this series will cover everything from sewing achievements & mishaps, construction updates, design progress, to finished pieces. I will also be sharing some of my research throughout the series as well. If you are interested in seeing some of my inspiration, you can view my {Threads} Pinterest board here. I hope you will join me on this adventure dear friend.

It has been far too long since I last wrote you. I send my sincerest apologies for this. 2020 seemed to take the wind out of my creative sails and found me spending an inordinate amount of time just scrolling through Instagram and Facebook- paying heed to the noise of the world more than I ought to have. I made the decision to take a hiatus from excess social media platforms to focus more time and energy to this blog and my channel over on YouTube. I do hope you will join me.

Seeing as it has been a while, I will update you a bit on the main events of 2020. I will not mention beyond this point the Covid-19 Pandemic or the lockdowns, as we have all been affected by it. My Gran and I have stayed home as we need, seldom venturing out unless necessary. Much of what I will report is due to staying home and the many cancellations that have occurred this past year.

Gran purchased a small chicken coop for the geriatric birds in my flock around the end of the summer. Finding this proved to be a challenge since it seemed that sourdough bread and raising backyard chickens suddenly became everyone’s past time. We managed to find the last our local store had in stock. It was quite a bit of fun to build and allowed us to spend some good quality time in each other’s company. The only glitch we found was what to call it. We have always referred to the existing structure as “the coop.” After some time had passed, we were re-watching a favourite film of ours, “The Best Exotic Marigold Hotel” which is about a home for the elderly in India. That was it! The smaller coop has thus been dubbed “The Marigold” and is now a home for aged birds. I plan to find some stencils this Spring/Summer that will lend an Indian flare to the rather drab exterior.

The Marigold came into existence due to a need for more space for my other flock.  They had previously been residing in the greenhouse. When Snugs- aka Maxene- went broody and became determined to set a clutch of eggs, it was decided that they needed more room as they were about to get a few new members. They would move to the existing coop and we would build the smaller coop for the older girls and Bertram, who had been previously residing in the main coop. In the early part of July, Snugs hatched 9 chicks, one of which did not survive. I purchased an additional 6 chicks from our feed and tack store. The Coop now has a fine family of 21 living within its walls. They have remained snug through the winter months. Now that the days are beginning to lengthen. They have begun laying and provide a rainbow of eggs each day.

With new housing for the birds, the greenhouse was now unoccupied which meant we could clean it out and use it to house our plants over the winter months along with one little bird who needed a little R&R before meeting her new family. I have enjoyed going out every morning to water the plants and harvest what is still going. I have begun formulating my plans to have a proper garden this year and will be starting seeds in the greenhouse here shortly. More on that to come.

The sewing room has been a mess due to the lack of use. I am currently working to remedy that situation. I did add a new friend0 her name is Florence. She is a hand crank sewing machine that I purchased from a friend of mine. She in need of some repair and I am in the hope that she can be used.  I will be doing a more in-depth introduction of her at some point in the future.

As I said at the beginning, this year was not at all creative in the way I had hoped that it would be. I am looking forward to 2021, as I feel the creativity has returned and the wind will once again begin to fill my sails. I have some sewing projects in the works, as well as gardening, cooking, etc. I hope to be more engaged with you all here as well as on my channel.

{Farm} The Legacy Behind the Farm and its Heritage

I wanted to take some time to share the farms beginnings with you. The Flying VS Farm has not only become a passion and career goal for me, ...

News from the Farm!